You are here: Home › Computers › Types of Typefaces: Serif, Sans-Serif and more 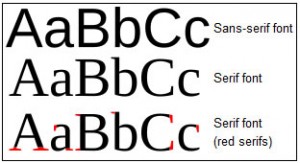 Serif fonts are widely used in traditional printed material such as books and newspapers. Many magazines employ sans serif typefaces, as some editors state that they are “cleaner”, regardless of any impact on readability from the lack of serifs. Numerous studies have been done on the readability of serif vs. sans serif typefaces. Studies indicate that serif typefaces may be more readable in print. Studies of on-screen use are more ambiguous, suggesting that low screen resolutions make serifs more difficult to discern, with a resulting erosion of readability compared to sans serif fonts. 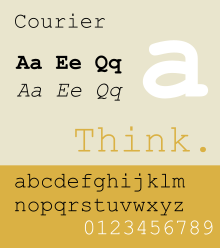 Courier is a great example of a monospace font

A monospaced font, also called a fixed-pitch, fixed-width or non-proportional font, is a font whose letters and characters each occupy the same amount of horizontal space. This contrasts to variable-width fonts, where the letters differ in size to one another.

The first monospaced typefaces were designed for typewriters, which could only move the same distance forward with each letter typed. This also meant that monospaced fonts need not be typeset like variable width fonts and were, arguably, easier to deal with.

In technical manuals and resources for programming languages, a monospaced font is often used to distinguish code from natural language text. 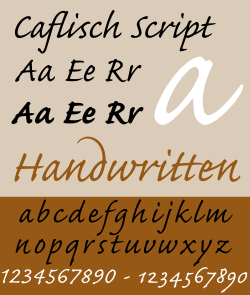 Script typefaces are based upon the varied and often fluid stroke created by handwriting. They are organized into highly regular formal types similar to cursive writing and looser, more casual scripts. In the image example you can see a casual script typeface called Caflisch.

A Unicode font (also known as UCS font and Unicode typeface) is a computer font that contains a wide range of characters, letters, digits, glyphs, symbols, ideograms, logograms, etc., which are collectively mapped into the standard Universal Character Set, derived from many different languages and scripts from around the world.

Unlike most conventional computer fonts, which are specific to a particular language or legacy character set and contain only a small subset of the UCS characters, these fonts attempt to include many thousands of possible glyphs, so that they can be used as a single typeface across multi-lingual documents. Arial is a commonly used unicode font.

Unicode is now the base character set for many new standards and protocols, and is built into the architecture of computer operating systems and programming languages.

A dingbat is an ornament, character or spacer used in typesetting, sometimes more formally known as a “printer’s ornament” or “printer’s character”. The term continues to be used in the computer industry to describe fonts that have symbols and shapes in the positions designated for alphabetical or numeric characters. Examples of characters included in Unicode (ITC Zapf dingbats series 100 and others):

A simulation typeface is one designed after a unique or stereotypical aspect of the letterforms or scripts of a different language. As an example, you can look at the image of Faux Chinese below:

Thanks to wikipedia for providing some descriptions and images!

How Helvetica Almost Caused an International Incident
OpenType vs. TrueType Fonts
Typefaces and Fonts: What is the difference?
A Lesson in Typography: Short Video Introduction